In Krishna Consciousness, we celebrate many beautiful festivals throughout the year. These holidays are an opportunity to deepen our spiritual practice and come together as a community.

Festivals vary in size and theme with Krishna Janmashtami (The Advent of Lord Krishna) being our biggest annual celebration. All our festivals include kirtan meditation and free vegetarian food with many also including philosophical discourse, dramas, dances, and festive decorations.

These events are open to the public and we welcome everyone to join us.

Devotional festivals follow the lunar calendar, and timings can vary from year to year. Sign-up for our newsletter for the most up to date information. 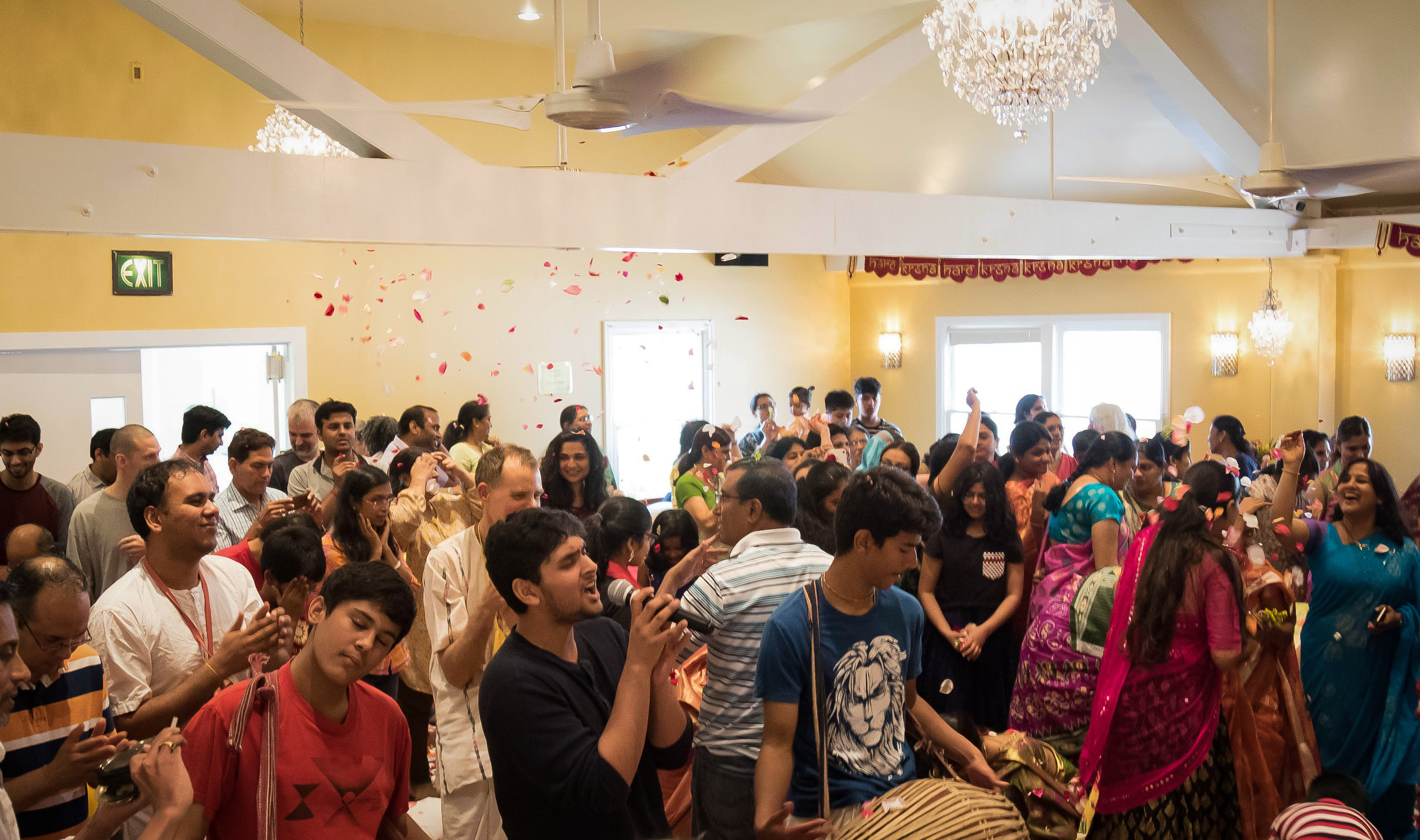 Ekadasi
Ekadasi is the eleventh day of the waxing and waning moons, which is roughly every two weeks. On Ekadasi, devotees fast from grains and legumes, and try to increase spiritual activities such as chanting, reading scripture, and other service. Check out the specific Ekadasi dates for 2023 calendar year here.

Appearance of Sri Advaita Acarya (01/27/23)
Sri Advaita Acarya is the foremost of all the Navadvipa Vaishnavas. He is preeminent in knowledge, renunciation and devotion. His appearance is generally observed in January. (Fast until noon.)

Nityananda Trayodasi (Appearance of Lord Nityananda) (02/02/23)
Lord Nityananda Prabhu appeared as Lord Chaitanya’s principal associate for spreading the congregational chanting of the holy names of God. He is an incarnation of Lord Balarama, Krishna’s older brother. Nityananda Prabhu appeared in the village of Ekachakra, in West Bengal, India, around 1474. It is by his mercy we can obtain love of Krishna. Usually takes place in January or February. (Fast until noon.)

Gaura Purnima (03/06/23)
Gaura Purnima is the Appearance Day (Advent) of Lord Chaitanya, Sri Caitanya Mahaprabhu, who appeared in Navadvipa, West Bengal, India, on a full moon night during a lunar eclipse, February 27, 1486. Lord Chaitanya is Krishna Himself, and came to spread love of Godhead through the congregational chanting of the Holy Names. Gaura Purnima is generally celebrated in the month of March. (Fast until moonrise.)

Rama Navami (03/30/23)
Rama Navami is the Appearance Day (Advent) of Lord Rama, one of the Lord s many avatars on earth. A chronicle of His activities is presented extensively in the epic Ramayana, and concisely in the ninth canto of the Srimad-Bhagavatam, a biography of Krishna’s many incarnations. Generally celebrated in the month of April. (Fast until sunset)

Nrsimha Chaturdasi (05/04/2023)
The Appearance Day of Lord Nrsimhadeva, who appeared to rescue his pure devotee, Prahlada, from his demoniac father. Generally celebrated during the month of May. (Fast until dusk)

Ratha Yatra (06/19/2023)
On Ratha Yatra, in Puri, India, the Lord Krishna, as Jagannath, and his brother Balaram and sister Subhadra, celebrate a special pastime by coming out of the temple and traveling across town on three giant carts. (In actuality, in this pastime the Lord is traveling from Dwarka to Vrindavan.) Hundreds of thousands of devotees assemble in the streets to see the Lord and get His mercy. In Puri, this is generally celebrated in the month of June. ISKCON temples around the world hold Ratha Yatras, generally during the summer months, bringing the Lord out to the people, and hosting festivals and feasts. These range from giant festivals in New York, Los Angeles, and London, to smaller processions. Portland Ratha Yatra usually takes part in the Beaverton Parade.

Janmastami (09/06/2023)
Janmastami is the Advent of Lord Krishna. The deities are dressed in a special new outfit, and the temple is decorated beautifully with flowers and vegetation. Dramas and musical presentations are performed, visitors usually have the opportunity to swing baby Krishna on a special swing, and a special abishek (bathing the Lord with auspicious substances, like milk, honey, yogurt, and fruit juice) is performed. Typically at least 108 special food preparations are offered to the Lord. A grand feast is held for visitors and devotees, from late evening on. Generally occurs in August or early September. (Devotees fast until midnight.)

Srila Prabhupada’s Appearance (09/07/2023)
Jagat-guru Srila A.C. Bhaktivedanta Swami Prabhupada took birth as Abhay Charan De, in Calcutta, India, September 1, 1896, the day after Janmastami. In 1959, he took the renounced order of life, and in 1966 founded the International Society for Krishna Consciousness, following his spiritual master’s instruction to preach in English. He authored more than 80 books and initiated thousands of disciples. By the time of his departure from this world, ISKCON had more than 108 temples, farm communities, and preaching centers. Read more about Srila Prabhupada. (Fast until noon.)

Radhastami (09/22/2023)
Radhastami marks the appearance of Srimati Radharani, Krishna’s eternal consort. Srimati Radharani is the mother of the universe, the spiritual mother of all souls, and She embodies purity, selflessness, caring, sharing, nurturing, and love. The word “Hare”, which we chant in the maha mantra, means “Radhe.” In the Krishna Consciousness movement, devotees carefully worship Srimati Radharani as the bestower of devotional service to Krishna. Devotees chant her name in the maha-mantra, worship her deity form, and by follow the instructions of Sri Chaitanya Mahaprabhu, who is the combined form of Radha and Krishna. Radhastami usually falls in September. (Fast until noon.)

Kartika (10/29/2023 - 11/26/2023)
During Kartika, or the month of Damodar, devotees worship Krishna by offering candles and a singing a special song, the Damodarastakam. Generally October-November.

Govardhana Puja (11/13/2023)
Govardhana Puja is celebrated on the day after Diwali. The festival is celebrates Krishna’s lifting the Govardhan mountain on his little finger and protecting his devotees. As a child, Krishna convinced the people of Gokul not to worship the rain god, Indra at the end of every monsoon season. Indra, angered, brought a huge storm. Krishna lifted the whole of Govardhan mountain (in Mathura) for seven days, allowing the residents to take shelter under it. Humbled, Indra became a follower of Krishna.
On Govardhana Puja, the devotees offer a mountain of food to Krishna and also pray to him. This mountain of food is decorated with flowers and worshipped, and devotees circumambulate the hill and offer prayers. There is a grand feast, preceded by no fasting at all! Generally observed in November.

Gopastami (11/20/2023)
Gopastami celebrates Krishna and Balarama’s first childhood day going off to herd the cows. This was a celebration only for men and boys, but Srimati Radharani and her gopi friends wanted to join in. They put on dhotis and boy’s garments to join in the fun. In many temples, Srimati Radharani wears a dhoti and turban on this day, and Her lotus feet are revealed. Gopastami takes place in the fall.

*About Fasting
Adults and older children typically observe some type of fast on each festival day. Fasts are followed by a prasadam feast, and fasting is considered a joyous austerity, happily undertaken. Devotees may observe fasts by either: fasting completely, by fasting from food but taking water, by taking fruit or fruit and nuts and some dairy, or simply by fasting from grains and beans. Devotees consider their health and occupational needs, plus if they are pregnant or nursing, when deciding how they will fast.